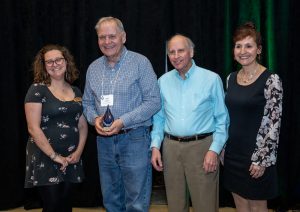 In pointing out the need for data from the upstream region of Green Lake, Stephanie Prellwitz, Executive Director of the Green Lake Association, said, "Citizen scientists are now playing a critical role in filling that gap and the data has already helped with our lake management efforts." Thanks to the vision of the initial coordinators, Eric Godfrey and Tom Wagner, the Green Lake Watershed WAV monitoring effort has grown to 19 volunteers and 14 monitoring stations covering every single tributary of Big Green Lake in just their first season of monitoring!

Tom and Eric were both collecting data on tributary streams to Big Green Lake as part of a larger Central Wisconsin Trout Unlimited monitoring group, but it was when they started developing the idea of monitoring ALL the streams flowing into Big Green Lake in an organized and consistent manner that momentum began to build and the Green Lake Watershed WAV took shape. The coordinated effort also benefited from Kat Griffith and Jesse Schwingle of Lumen Charter School, who had been involved in monitoring for the past 5 years.

Kicking things off in the spring of 2018, informational meetings were held to inform the community of the monitoring opportunities and volunteers were recruited and trained, resulting in successful data collection and reporting. Outreach to community and youth is an essential component of the Green Lake Watershed WAV monitoring as the organization continues to educate others about maintaining a healthy watershed and lake for generations to come.